André Silva Santos (b. São João da Madeira, 1990) has a degree in Communication Sciences at the Universidade Nova de Lisboa (FCSH-UNL). Later, he completed a year-long course in Directing at the Restart – Institute of Creative Arts and New Technologies,  and a post-graduation in Cinema Project Development (specialization in Dramaturgy and Direction) at the Escola Superior de Teatro e Cinema (ESTC-IPL), in Lisbon. After concluding an internship at the Arquivo Nacional das Imagens em Movimento [National Archive of Moving Images] of the Cinemateca Portuguesa - Museu do Cinema, and working in several films and audiovisual projects, he is currently an MA student in Aesthetics and Artistic Studies (in the branch of Cinema and Photography) at FCSH-UNL, while at the same time being a grantee at this same university where he integrates, as a research assistant, the team of the BlackBox project.

Aside from his academic path, he has been working mainly as assistant director and script supervisor, having already worked in the areas of archive, editing, casting, production and translation in the film-production companies Terratreme, O Som e a Fúria, Rosa Filmes and Videolotion, being also involved in audiovisual projects for Rádio e Televisão de Portugal (RTP) or Teatro Nacional Dona Maria II (TNDM II). He has worked with directors such as Miguel Gomes, João Rosas, Susana Nobre, Michael Moore or Miguel Seabra Lopes & Karen Akerman, whose films have been presented in national and international festivals such as Cannes, Berlin, Locarno, Rotterdam, Buenos Aires, Curitiba, Vila do Conde, amongst many others. 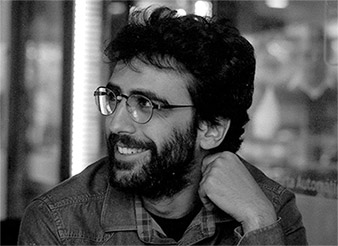