Isabel Galhano Rodrigues, PhD in Applied Linguistics, is Professor at the School of Arts of the University of Porto, Portugal, where she teaches courses on German linguistics and on intercultural studies. She is researcher of the Linguistic Centre of the University of Porto (CLUP), and collaborator of the Linguistic Centre of Universidade Nova de Lisboa (CLUNL), of the Institute of Compared Literature Margarida Losa (ILC) and of the Centre for African Studies of University of Porto. Her research preferences began within the area of conversation/discourse analysis, the subject of her master thesis, entitled Sinais conversacionais de alternância de vez (Conversational turn-taking signals) and published in 1998. In her PhD project, she pursued research on multimodality in face-to-face interaction, including coverbal kinesic units in the analysis of communicative events in European Portuguese. Her dissertation, published in 2007, O corpo e a fala (Body and speech), documents the reception of Gesture Studies in Portugal.

Since then, following both an ethnographic and a cognitive approach of multimodality in face to face interaction, she has published studies on several topics, such as: gesture space in three different linguistic communities, gestures in conference interpreting, listing gestures, multimodal deixis, and home signs of deaf children with cochlear implant.

She has been invited to collaborate in the TKB-Transmedia Knowledge Database project (2010-2013), directed by Carla Fernandes, where she analysed speech and body movements in face-to-face interaction in contemporary dance.

Furthermore, she has been developing some work in ethnographic film, as well as in language documentation, as important means of data collection for the study of varieties of Portuguese, spoken in distinct linguistic communities in different continents. 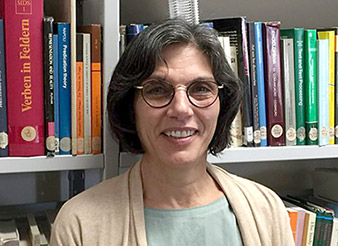