Dr. Scott de Lahunta has worked as a writer, researcher and organiser on a range of international projects bringing performing arts with a focus on choreography into conjunction with other disciplines and practices. He is currently a full-time Senior Research Fellow with Deakin Motion.Lab, Deakin University (AUS) and Visiting Academic the Centre for Dance Research, Coventry University (UK). He is co-Director (with Florian Jenett) of Motion Bank, part of the Institut Designlabor Gutenberg hosted by Hochschule Mainz University of Applied Sciences. From 2010 to 2014, he was Director of the first phase of Motion Bank a Project of The Forsythe Company. He was an Associate Research Fellow with Dartington College of Arts (UK) from 2000-2009 during which time he began a long-term research into creative processes in dance with Wayne McGregor. From 2008 to 2013, he was the Director for R-Research the interdisciplinary research department for Wayne McGregor | Random Dance. From 2006-2010, deLahunta was Research Fellow with the Art Theory and Research and Art Practice and Development Research Group, Amsterdam School of the Arts, where he worked closely with the dance company Emio Greco | PC, a project which culminated with the two year research project (2008-2010) Inside Movement Knowledge. During this period, he also served as an advisor on the Siobhan Davies Digital Dance Archive project and Synchronous Objects, for One Flat Thing, reproduced by William Forsythe. He has held short-term research positions in a variety of contexts including Kings College Cambridge (2005) and serves on the editorial boards of Performance Research and the International Journal of Performance Arts and Digital Media. He has published widely and is frequently invited to speak at events internationally. deLahunta has sat on various awarding juries including Arts Council England, NESTA and Prix Ars Electronica. He has taught for different education institutions in the past including the School for New Dance Development in Amsterdam (1994-2006) based at the Amsterdam School of the Arts, where he also co-developed the Amsterdam Master of Choreography program. 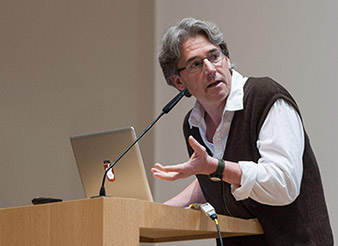